“The mountains are calling and I must go.”

This phrase has been flooding everyone’s Pinterest and Instagram, since…well…the dawn of Pinterest and Instagram.  I, myself, have probably pinned it 3-7 times during those dark twisty periods when I felt like running away from all my problems would be fun and/or feasible.  It is the kind of phrase that seems adventurous, and mystical.  Like something Charles Dickens would write if he were alive today and was a hipster.  (He’d be one of those hipsters that wears cowboy boots when they skate board.  You know he would.)

I really like the graphic images that go along with the phrase too, always perfectly filtered with matching badass typography.  A few times I’ve almost printed it out and hung it on my wall, but then I never did.  And there are a number of reasons this phrase hasn’t made it’s way past a pin for me, but really just two that stand out.

First, I don’t know the first thing about mountains.  I know they are pretty.  I know they are tall.  But beyond that, I think I pretty much just have no idea about mountains.  You could have pushed me over (the cliff of a mountain) with a feather the other day when a coworker told me her wife hit a bear with her car.
A bear.
(There are bears in Virginia?  Where am I?)

So you see…I just really have no idea about mountains.  If you’re still unconvinced, and are unfamiliar with my previous mountain/volcano climbs, you can read about that disaster here.

The second reason this little phrase hasn’t made it farther than a screen grab, is I feel like it’s incomplete.  “The mountains are calling and I must go…”

Go potty?  Go shopping?  Go out for BOGO tacos?  I mean presumably, to the mountains of course, I’m not an idiot, but the lack of punctuation and subtext means you can’t really be sure that is how the phrase ends, now can you?

I moved to the mountains a week ago today.  I don’t think they were calling me or anything, but it’s difficult to say because I have been so busy the last few months I haven’t really given due diligence to checking my voicemail for any rouge mountain calls.  I’m pretty sure it was just the one job offer call I got, but in any case, I was inspired to pack up my little Honda Fit and a shit ton of spaghetti, and move to Virginia.  I don’t know why I specifically packed spaghetti, except maybe that I really like it and I thought it would make me feel comforted in Virginia.  I have of course now realized that they do sell spaghetti, of many kinds, in Virginia.

But I started a new job, which was overwhelming, and I’m couch surfing at an Air BnB, which is distressing (I really don’t like using stranger’s dishes).   I’m also going to be 30, like…really soon.  So with all of that going on, you can definitely assume that I am struggling with some anxieties.  Always the rationalist, however, I had planned for these exact anxieties, and had a regimented exercise plan laid out for myself even before I arrived.  It has mainly consisted of wiggling into my workout leggings (which is a workout in itself #amiright) and crossing town to a trail.  I mistakenly called it a “hike” recently, and it turns out that no, it’s not really a hike, because it’s “just kind of a walk through the woods”.

All the same, this “walk” was aggressive.  It certainly isn’t my first time in the woods, but I quickly found out that people aren’t kidding around when they say that Ohio is “flat” (quite fittingly, autocorrect changed “flat” to “fat”).  Despite the sweat, and feeling like a 100 year old woman trying scale Mt. Everest, I have “walked” daily.  It has been good for my brain, and my soul, and definitely my ego.

So this weekend, I had convinced myself that I was now a tuned athlete, and assumed the burning in my calves was the same thing as “runner’s high” because they hurt less if I kept going and that felt significant.  Also, I had done the 1.5 mile trail loop in the city park four times already, and I wasn’t sweating through my socks anymore.  So naturally, I had the idea that I should show off my skills on a 4 mile hike, because I am now a seasoned hiker.  But the thing is, I am not. 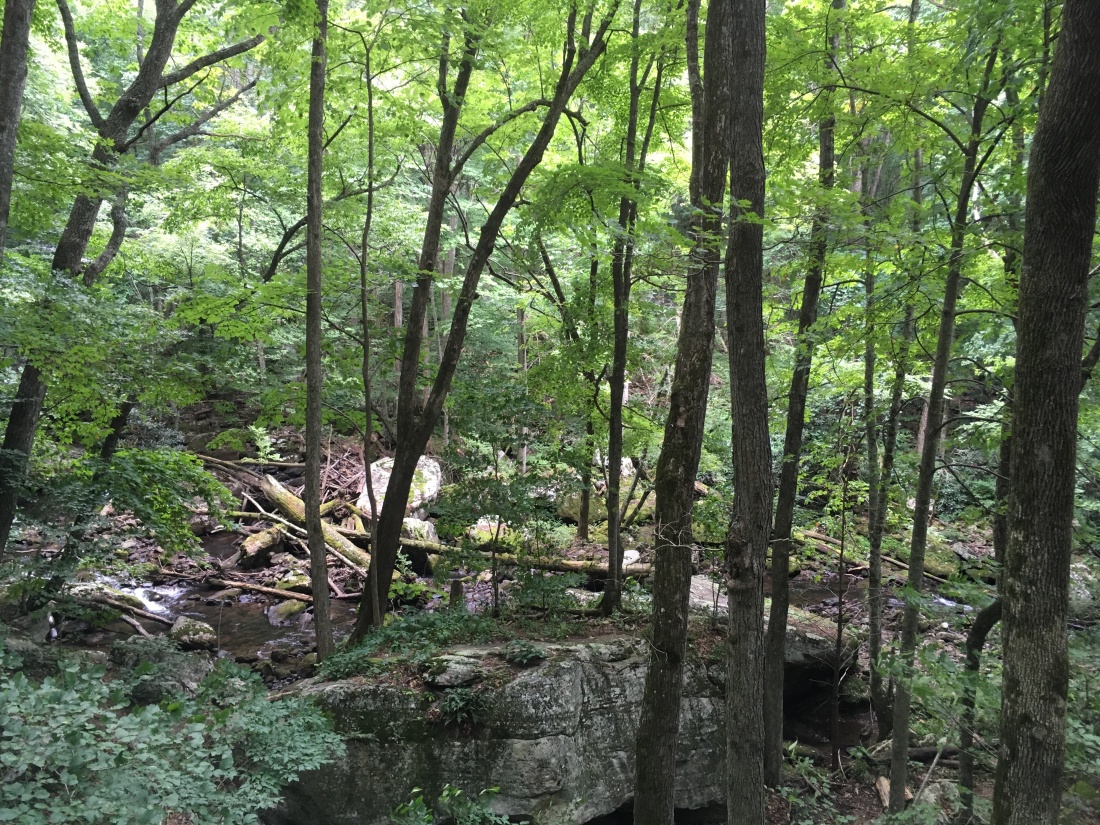 I also hiked past rocks.  There were big rocks, and little rocks, and there were rocks that looked like they might fall on you and crush you to death if you sneezed at them the wrong way.  I didn’t take a picture of those rocks, because, of course, the camera flash might have caused an avalanche and I wasn’t in the mood.

I hiked and I hiked and I hiked, and I made it up to the top where there is this really lovely waterfall.  There are stones all around that make wading easy, and the falls mist you ever so gently.  It’s the kind of place where people probably go to work on their novel, or to have picnics with the love of their life.  Aside from the signs that warn you if you swim in the pool you could die a horrible, awful death, it’s actually one of the most peaceful places I have been in a long time.

Standing at the top of the climb, sweating, and catching my breath, I let the sprinkles of the waterfall hit my face.  I felt like I had run a marathon, and won.  I felt tired and excited and hungry all at once.  I knew how far I had come, and I knew that I could make it back, and that felt good.  And it was then, there in the mist, on the cool mossy rocks, with the whole world half a mountain below me, that I realized how to finish the phrase.

“The mountains are calling…and I must go…”

I must go home.

And eat a sandwich.

And take a nap.

2 thoughts on “On Love and Mountains”