Love in the Time of H1N1

Kind of about love, mostly about cheese

On Love and Nothing Changing

Not too much has changed since I’ve gone off the deep end.  I feel generally the same.  No fantastic weight loss or a sudden diminishing of achey joints.  I haven’t seen the light, bought chickens or sold all my clothes that were made by slave children (though now that I’ve said that I feel kind of obligated to look into it…the slave children…not the chickens.)  I have read 1.5 books in 1.5 weeks, something I haven’t done so enthusiastically since I was mid Berenstain Bear series, but other than that…I’m the same Mary; jonesing for a shot of whiskey and a Netflix binge every time someone sneezes at me the wrong way and of course forever and ever hopelessly devoted to the blue boxed blues (aka mac and chee).

But while my core values have remained the same, secretly I do think my whole world has been turned upside down.  I’m continually surprised at how easy this all is.  How incredibly lazy I must be on a regular basis not to even look into changing these things once or twice a week.  The only person who really took a hit from me being vegan was my mother, but that’s just because it’s a mom’s job to feed you things that will make you warm and cozy when you visit and not eating cheese pretty much prohibits that.

Aside from not eating cheese, there are so many things I’m actually doing now.  I kid you not, my house of three cooked in practical darkness for 4 months because I didn’t know how to change “the ballast” in our kitchen’s fluorescent light and was “too busy” to bother figuring it out.  Two days into our fast of sorts and Jason was up on a ladder and I was flipping switches on our junction box like a mad scientist!  I also rewired a ceiling light to be an outlet.  Like a boss.

It’s painfully obvious that the main culprit to my laziness was TV but what makes that statement unbelievably more pathetic is that I hardly miss it.  This took me by surprise, of course, considering I never went to sleep (not one night!) without Sam and Diane bickering in sync with Jason’s snoring.  I am pretty sure was setting the record for most seasons of Scandal watched in one week.  I was practically in a relationship with my Netflix account (and Jake Ballard).  Hell, I even wrote a blog about it once.  But without TV there is so much time in the day.  Did you know, two episodes of How I Met Your Mother is a trip to the gym?  One episode of Dexter is 5 chapters in a book you’ve always been meaning to read.  An episode of Cheers is a texting conversation to catch up with an old friend (or a phone conversation if either of you can bear the influx of true human contact).  I could seriously get used this getting shit done thing.  It’s so much more satisfying to cross “clean out car” off your list instead of “eat a carton of ice-cream while finishing the New Girl saga”.  You wouldn’t think so…but it really is.

Beyond realizing the immense amount of time that gets sucked into the Twilight Zone of TV streaming, here are some other things I have learned:

1) Oreos are vegan…that’s like telling an alcoholic that beer doesn’t count…absurd.
2) I eat entirely way too much meat to be reasonable.
3) You can make an entire panini without cheese, butter or meat and still have it be so good that you want to crawl inside of it and live there until you’re old (my typical reaction to a traditional panini or really any sort of hot sandwich).
4 )There’s something amuck with Russia.
5) I can paint an entire wall in 45 minutes.

I wanted to leave it like this so that when I woke up I could say “goooood morning” like a sad Eeyore with a cloud over his head and then laugh uncontrollably but then I was worried that Jason might leave me on the grounds that I’m clinically insane.

6) What a ballast looks like.
7) I have no idea how to remove a ballast.
8) That Jason understands electrical things and can fiddle with said things without dying OR falling off the ladder.
9) That I have the cutest niece in the entire world (see below before you dare to argue): 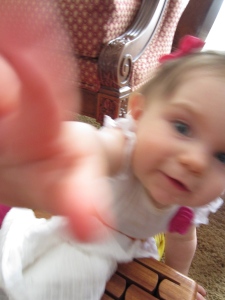 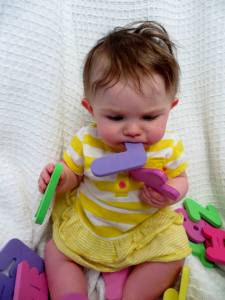